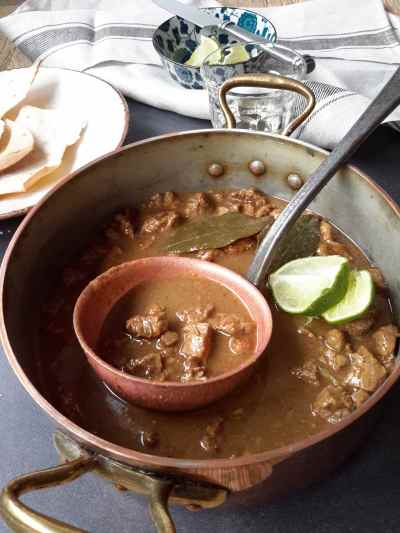 Belgians are known for inventing fries, having the best breweries in the world and excelling in the most decadent chocolate production, so it is only natural that these top ingredients found their way into the kitchens and became a staple in pastry as well in savory dishes. My chocolate marinated steak I will showcase later when it warms up and the barbecue season kicks in and today’s spotlight is on my father-in-law’s Flemish carbonades or in dialect stoofvlees.
Although this slow cooked stew is based on dark beer, it is equally beloved by children as the adults. The alcohol evaporates by boiling it for hours and all you are left is a nice tangy flavor which is used as sauce for potatoes, pastas, steamed veggies… you can let your imagination run wild. Keyword is low and slow, so it’s something you can make over the weekend and enjoy it later or freeze in portions. One extra note: it gets better and better over the time as flavors mingle together.

Preparation:
Start by cutting the meat in cubes.
Season with salt and pepper.
Heat 1 tbsp coconut oil and divide meat in two batches.
Fry first batch until golden (3-5 min) in the cooking pot.
Remove it preserving all the juices with it.
Repeat frying with the second batch.
Remove it from the pot and add last tbsp of oil. Do not wash it after frying the meat.
Cut shallots in tiny cubes and add them to the oil together with star anise.
Fry for 5 minutes.
Pour wine over and let it simmer until completely evaporated.
Remove star anise and return meat to the pot.
Add bay leaves and roasted bones.
Smear 1 tbsp of mustard on each slice of the bred.
Add them to the pot.
Season with pepper and add hot water and beer after that.
Bring to a boil and add maple syrup.
Boil covered with the lid for 45 minutes and then uncovered on medium heat for about 1h15 minutes (or until nice thick and shiny).
It is bursting with flavors and I am sure that it will find a way to the table during the festive season.