There are many firsts in our life that leave a special mark on us and we remember them fondly and among my most treasured firsts – visiting Paris for the very first time.

I just got a new job and a welcoming training took me to Brussels for almost two weeks. Being a hop, skip and leap from Paris by train some colleagues recommended visiting Paris and spending a day over the weekend– a day that I saw the quintessential Parisian landmarks, discovered calm hidden passageways in the middle of the urban jungle and most unexpected views of Paris. Of course, what helped was that one member of our little party had been very familiar with the city and we could leave the beaten tourist tracks and explore the city like Parisians do. Since then, I have returned many times in different company and different times of the year, but that route that I’ve been shown has remained my favorite and quite affordable for girl on the budget.

We arrived at Gare du Nord with an early train. The station is stunning — rustic looking with glass roof and as it happens one of the most romantic scenes from the hit series Gossip Girl show was shot at the very place. 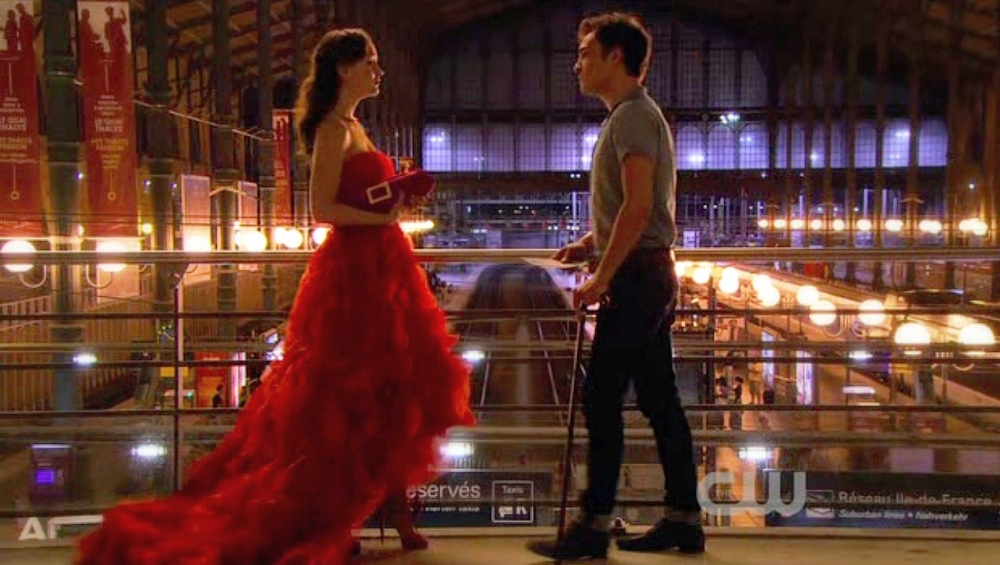 Our ‘guide’ recommended grabbing a small bite in the nearby boulangeries ‘Du Pain et des Idées’ We ended up taking the metro to get there, but you can easily walk as well. Located at 34, Rue Yves Toudic it’s one of the Paris’s last boulangeries. The charming interior and smell of special bread and puff pastry lingering around will have you leave the place with bag full of goodies. My personal favorite, Les Escargots, snail-like shaped buttery dough filled with gooey praline. We found a quite spot on the sidewalk and enjoyed this gluten goodness as we witnessed scenes of life in the city. It was only starting to wake up. 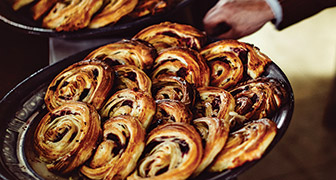 Occasionally men or women would ride by on the bike with a basket and baguettes half way sticking out of it. I took a notice then of the women– what struck me is how little make up they wore. I mean where I grew up, women would not leave the house without primer, foundation, concealer and finish it all with the contouring. Sometimes I feel that we are like a Monet painting — nice from far, but up close slightly blurry mess. Parisian woman actually concentrate on having first class skin treatment leaving the natural glow to come through, bit of mascara and signature red lipstick and they are good to go.

We hopped again on the metro to the Notre Dame station. Conveniently, if you get a day pass ticket, it’s valid for all metro lines and quite affordable.
We were met with perfection floating on Île St-Louis, softly glowing and with tourist swarming around despite early hour. I remember asking myself the very same question I did when I first visited Brugge in Belgium: how lucky you have to be, if you happen to leave in the nearby buildings facing the medieval beauty of the Notre Dame and overlooking the Seine river. I can not imagine ever getting tired of that look, despite constantly having tourists running around. Looking at the Cathedral I started inspecting it for those fine descriptions I have read in my most beloved novel written by Victor Hugo ‘The Hunchback of Notre Dame’. If you haven’t read it yet, it is a great way to prepare yourself for the first and every next visit to the city. Next to this book an absolute must read is Emil Zola’s novel ‘The Belly of Paris’ describing like no-one the city and it’s gourmand scene through the eyes of hungry aristocrat … and lastly see the world of lust and luxury through bored french doctor’s wife living way beyond her means in Gustave Flauberts roman ‘Madam Bovari’. 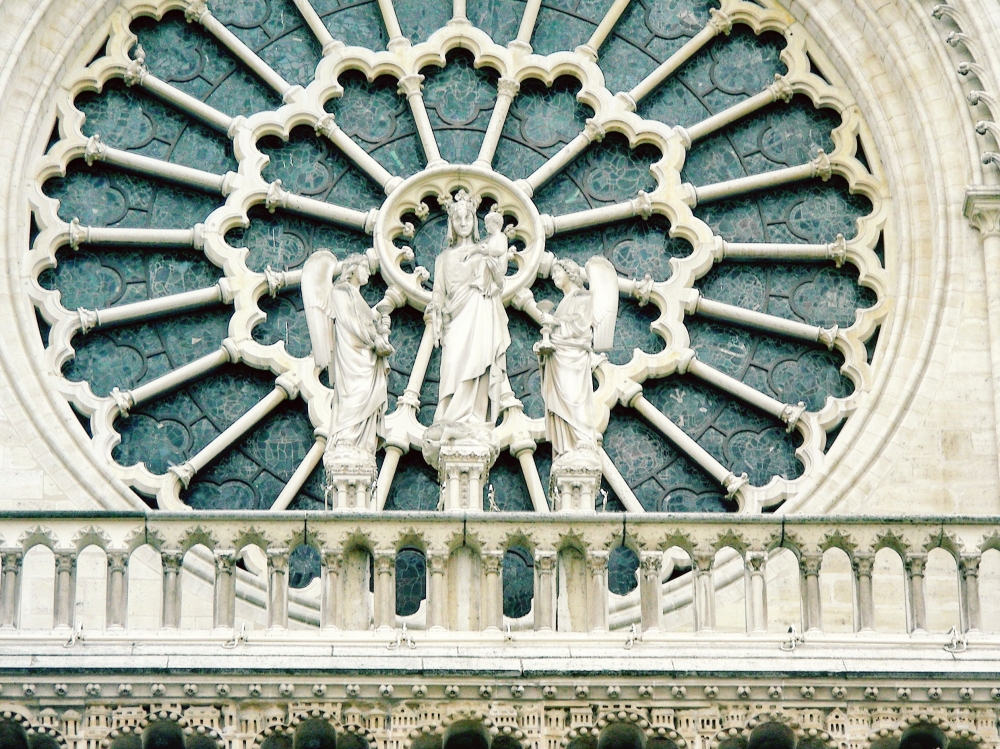 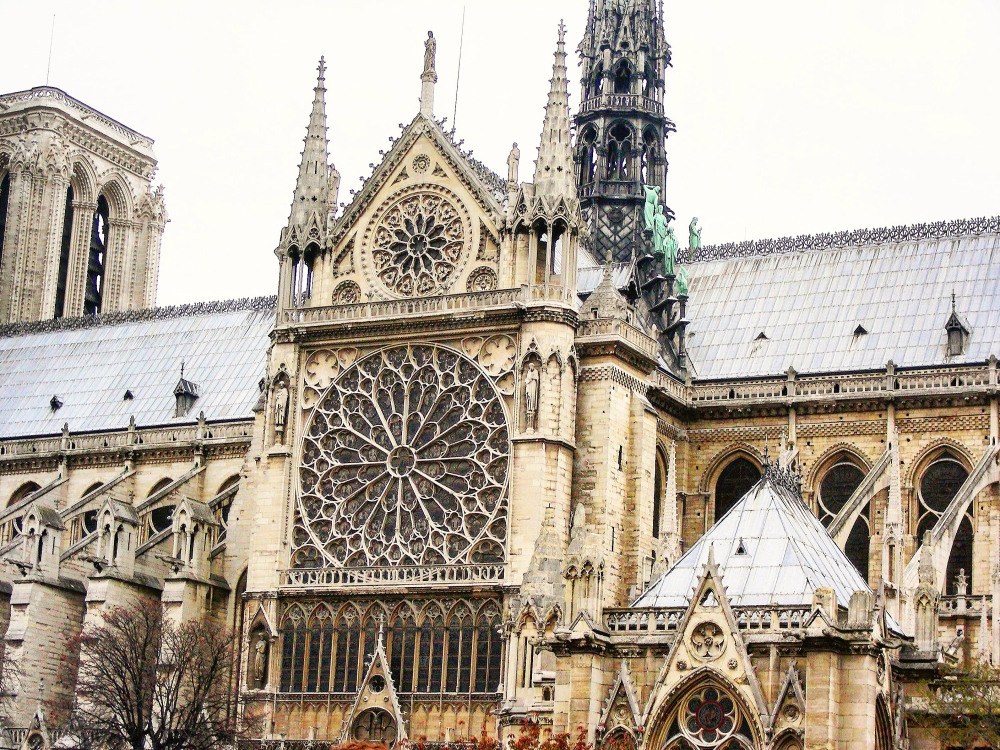 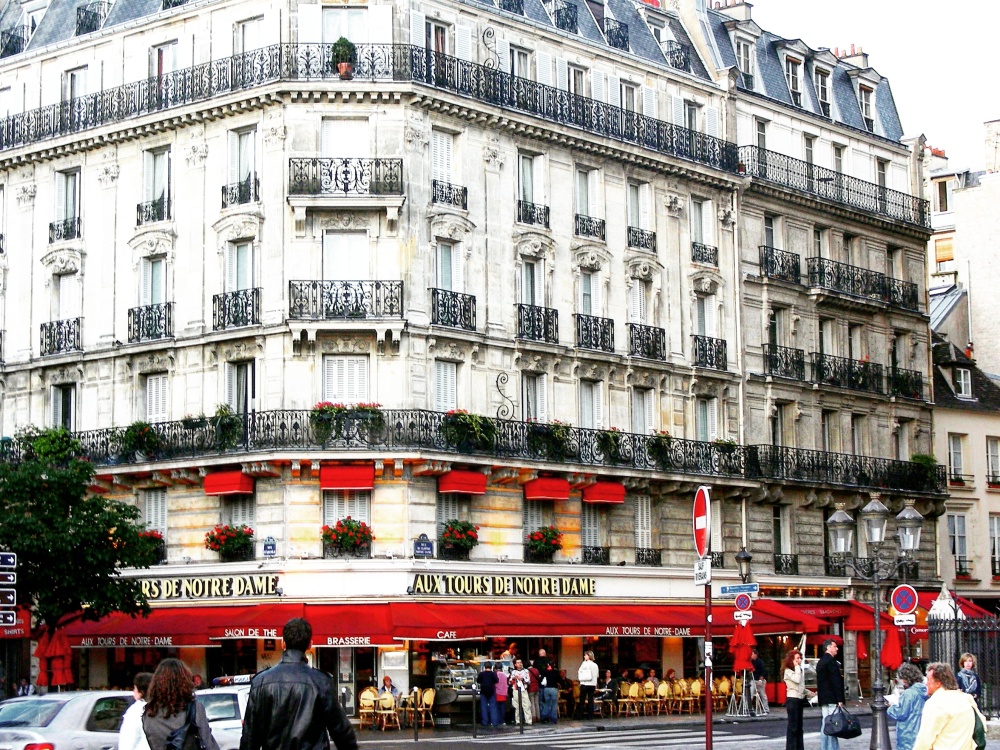 From there we took a leisurely walk to Pont Neuf at Rue Dauphine A6. Contrary to it’s name (New Bridge) Pont Neuf is the oldest stone bridge in Paris. Built in 16th century it was also the first bridge that crossed entire width of the Seine connecting both ends of the Île.
Leaning over to see boats floating by full of tourists trying to capture every scenery and actually missing out on the best part of it all — just leaning in and feeding all your scenes with all that beauty. If you walk down the steps of Pont Neuf, you will find a very quite garden in the middle of the urban jungle — Square du Vert-Galant. 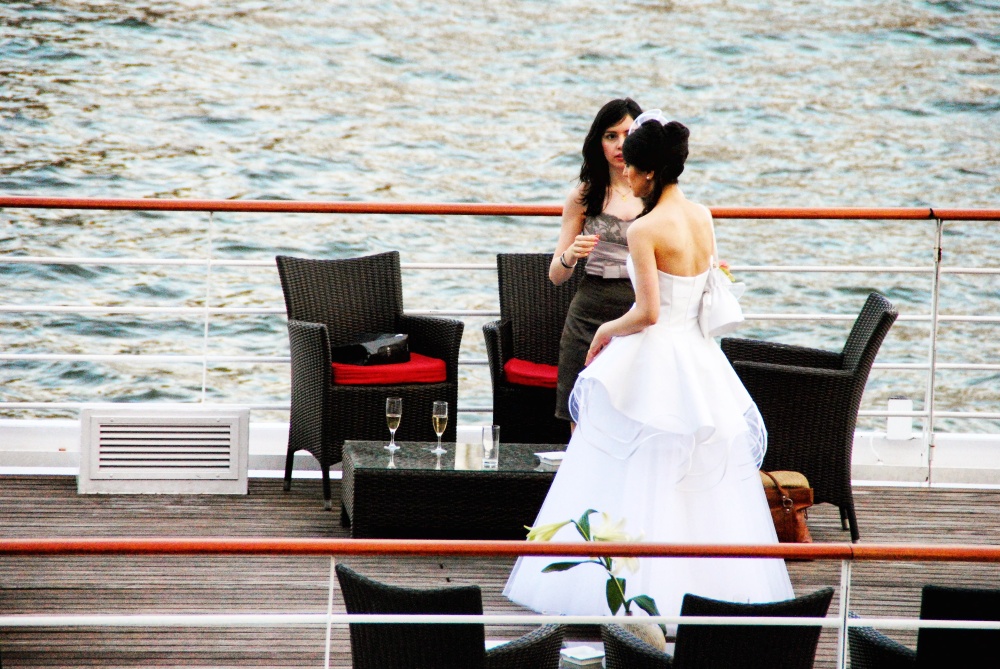 The Louvre was our next stop. It would be unimaginable to visit Paris without checking out the former Royal Palace that is home to 35000 art pieces and 1000 guards keeping them under the eye dressed in sharp Balmain suits. The long line at the Pyramid entrance can be very immobile and uncommonly resembling a nonchalantly dropped garden hose, but if you enter the Museum from the Metro station or at the Portes des Lions, you will avoid long queuing. I was obsessed with the “Da Vinci Code” movie and having seen it a handful of times, was on a mission to see the Last supper and Mona Lisa especially. The place was filled with so many visitors that the Mona Lisa ended up looking like a poststamp from when I was standing…but still it was worth the effort. Talking about the movies that will get you into Paris mood on the top of my list are ‘The Da Vinci Code’, Woody Allen’s masterpiece ‘Midnight in Paris’ and of course flamboyant ‘Amelie’. 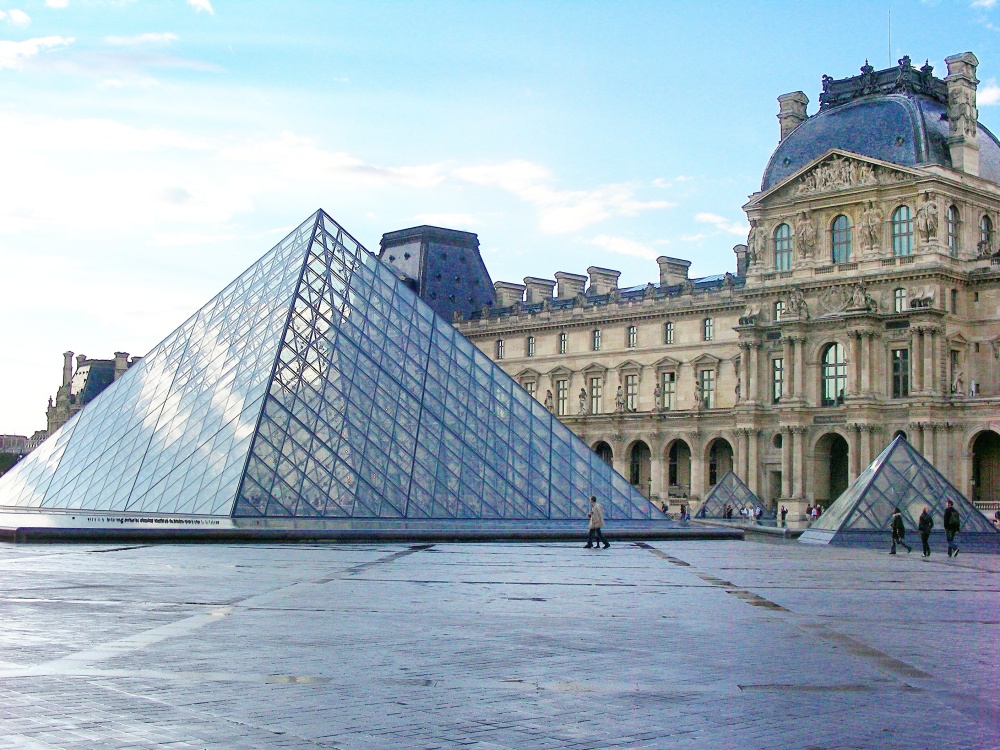 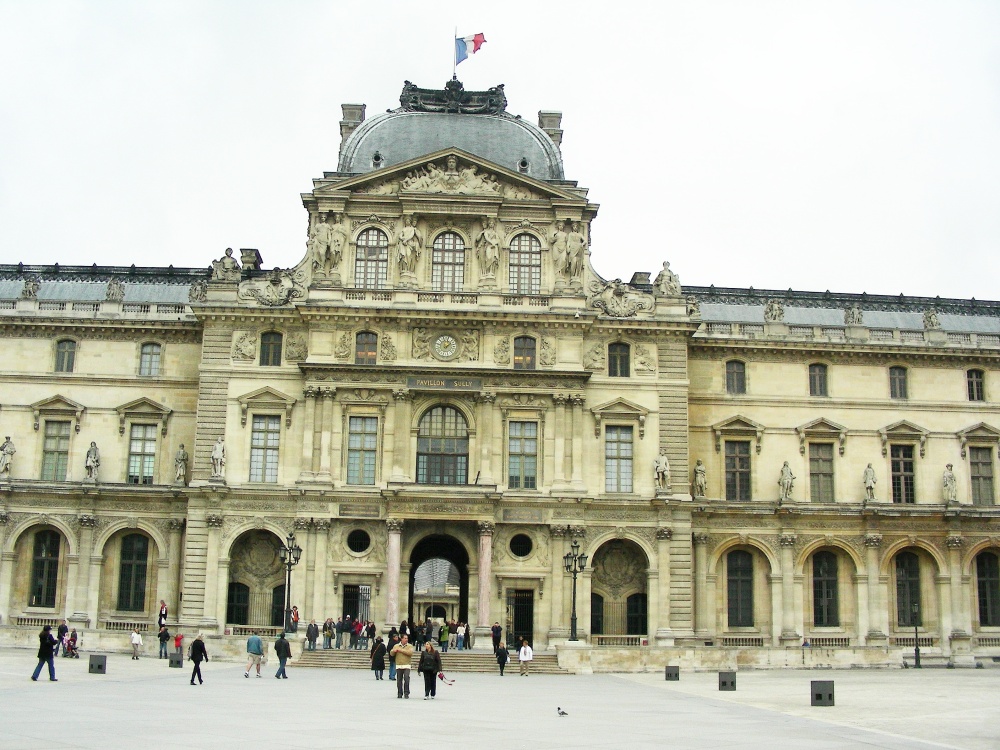 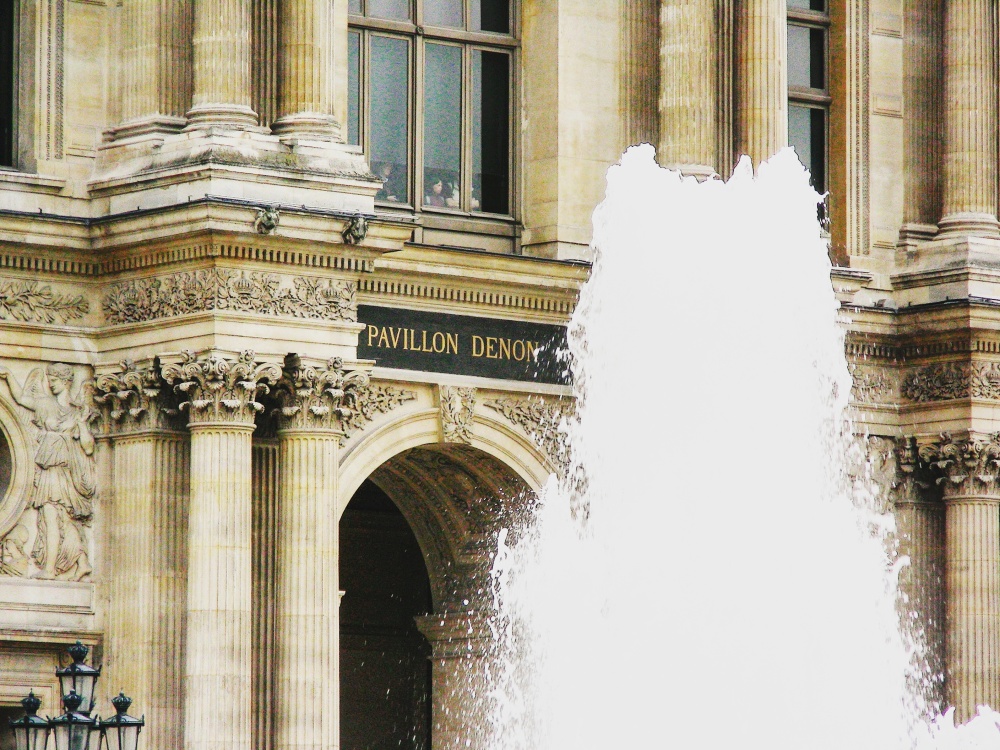 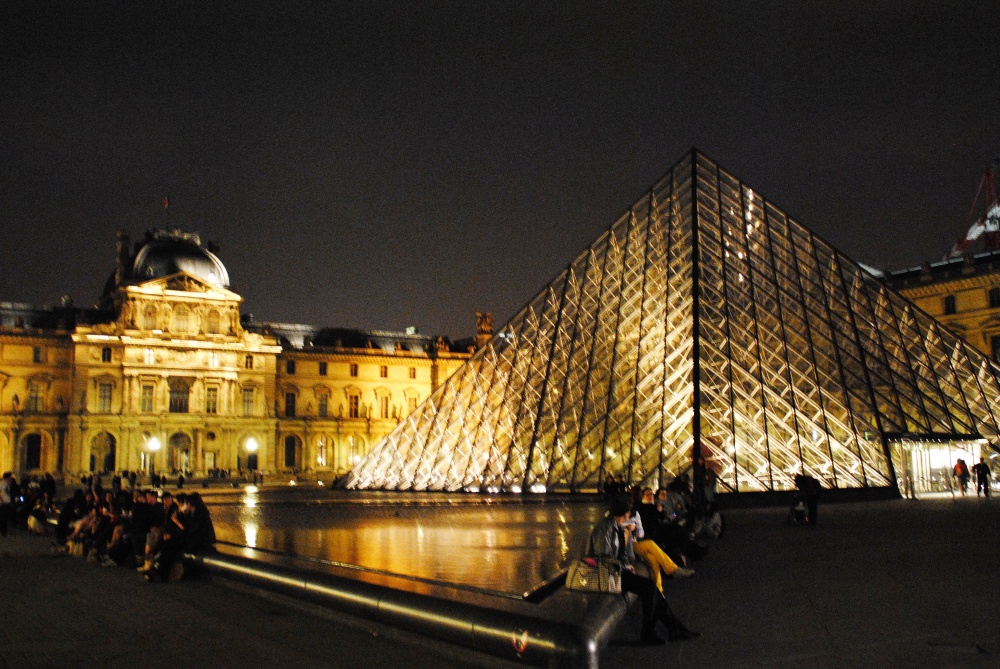 We were caught by a small spring shower coming out of the Louvre and decided to look for shelter in the nearby Arcade. The covered passageways containing specialized boutiques, tea salons and cafes used to be very popular, but as the shopping habits changed many have disappeared. From about a dozen left, Galerie Vivien on Rue des Petit-Champs and Rue Vivien is one of the most beautiful with a stunning mosaic floor. We had a small coffee and refueled for the next part. 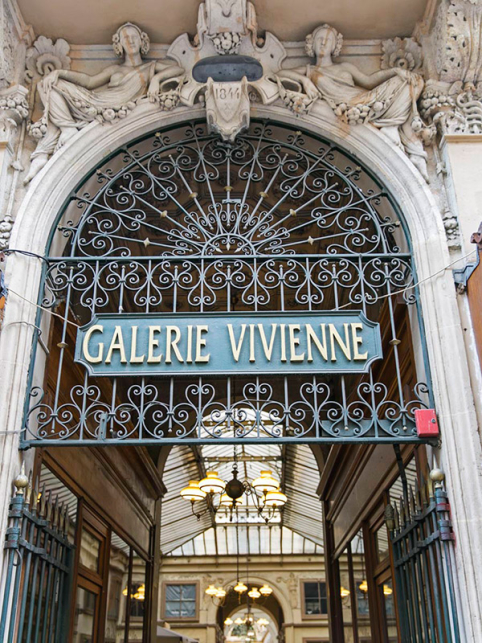 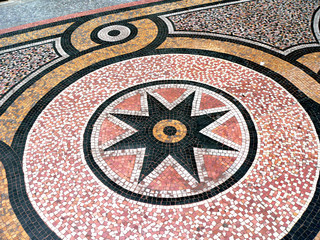 I asked my friend before we arrived, if we could pass by Chanel flagship store at 31, Rue Cambon. I was on a budget and shopping was not my intention, but I longed to see the window display and the store from up-close. I have read that Coco had an apartment on the second floor above the store furnished in oriental style where she used to entertain friends and customers. Coco actually never spent a night there, but instead rented the penthouse of the Hotel Ritz across the street. She believed that women should keep their private life secret from the public. To this day you can rent the very penthouse at the very high price. And not only Coco was a frequent visitor in the Hotel, Zelda and Scott Fitzgerald were staying there on more then one occasion and at one point even thrown out for partying too loud.
If you are a book nerd, like myself, then you will not want to miss Hotel Belle in which Marcel Proust would spend the summers of his childhood and of which he will later write in ‘Remembrance of Things Past’.

It was already very late in the afternoon when we were walking through Jardin de Tuilleries and on our way to Place de la Concorde. One of the biggest and most beautiful squares in Europe. Sadly, in 1700 was the place were Marie Antoinette was guillotined. 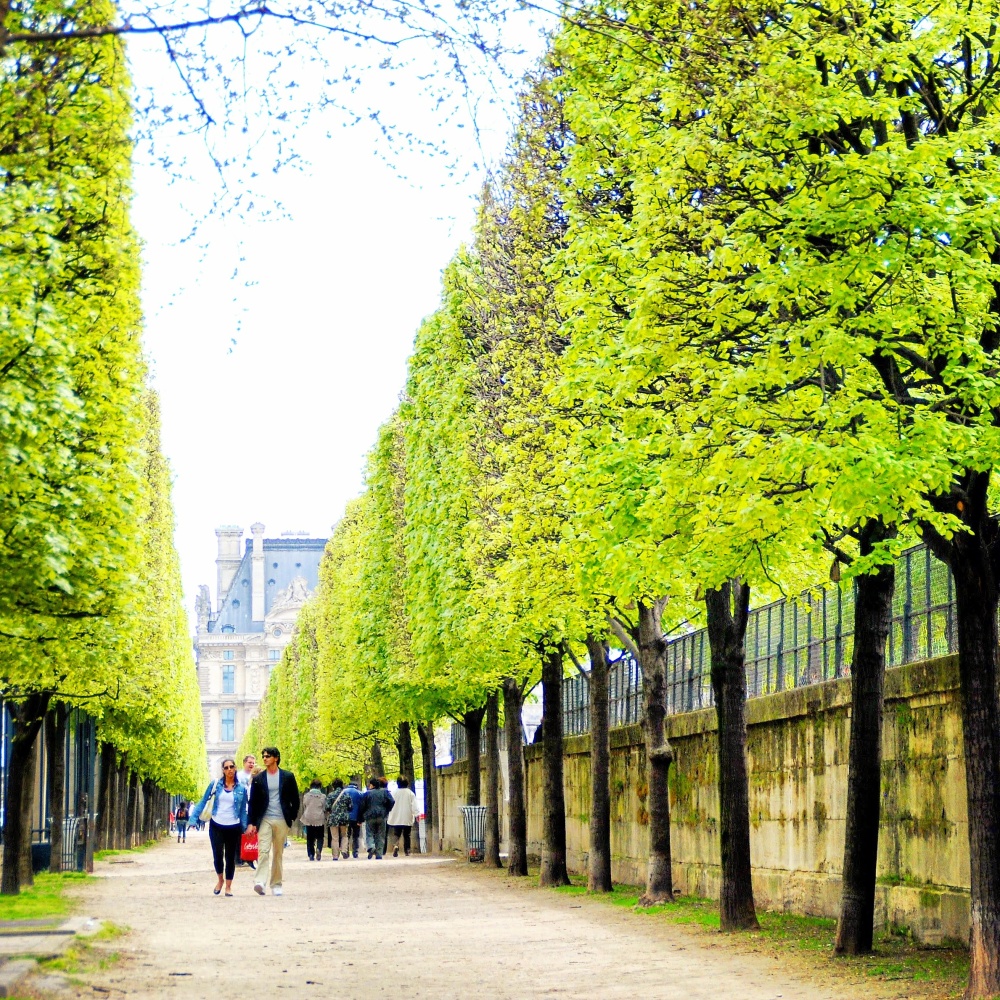 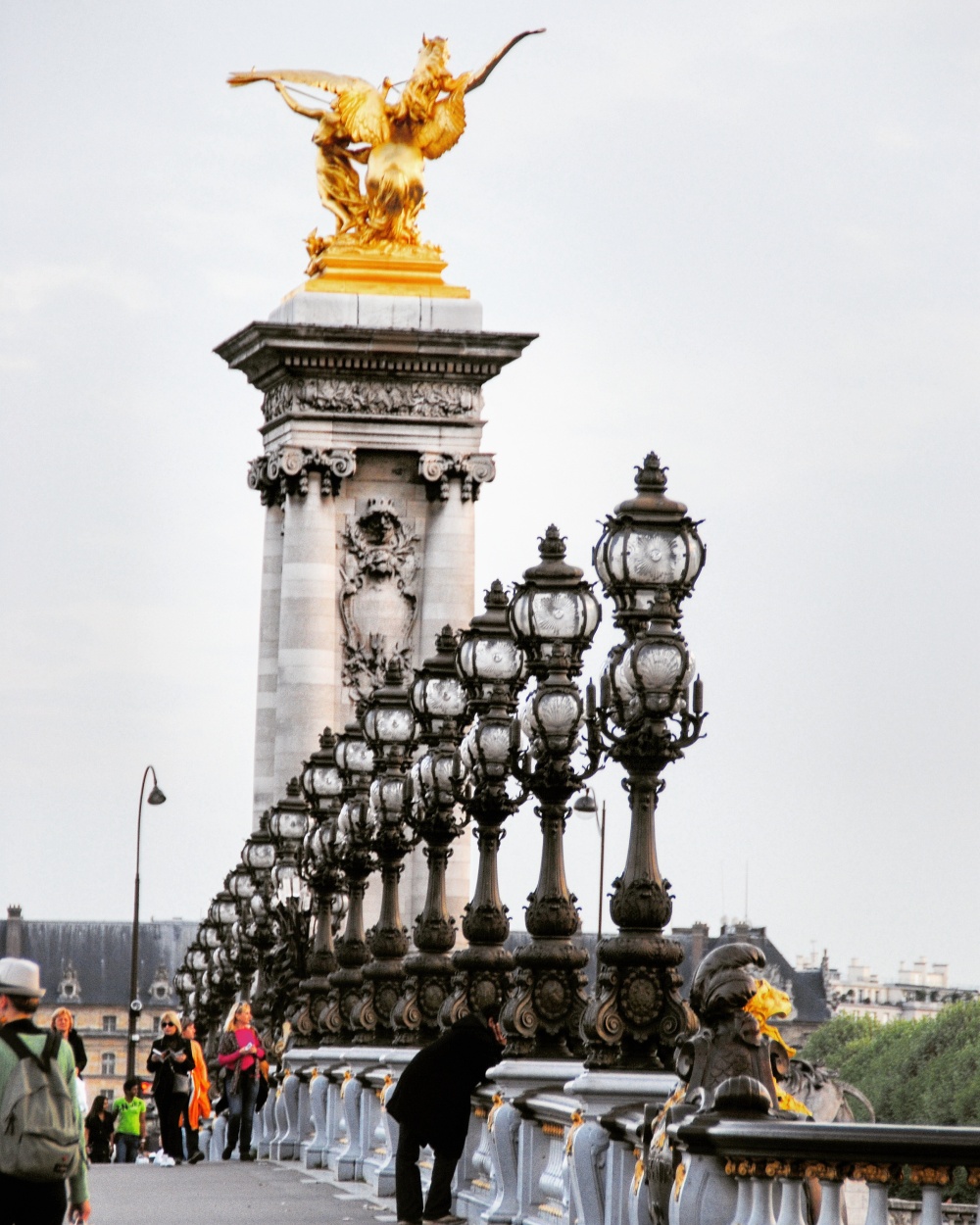 Not long after the Champ Elysees was in front of us and the Arc de Triomphe. Now, Paris is one of the most beautiful cities in the world, but traffic is not their strong suit. One can not help not to think about who came up with the idea of 13 different lanes coming together at the Art de Triomphe and if you happen to hear about the aggressiveness of french drivers, you are puzzled exceedingly. Their reputation proceeds them.

Even in the eighteenth century British travelers to Paris were remarking on what lunatic drivers the French were, on ‘the astonishing speed with which the carriages and people moved through the streets … It was not an uncommon sight to see a child run over and probably killed.’ I quote from The Grand Tour by Christopher Hibbert, a book whose great virtue is in pointing out that the peoples of Europe have for at least 300 years been living up to their stereotypes. The Sacre-Coeur was our next to last stop. The most beautiful church in Paris showcases some of the most impressive views of the city. Continuing by metro we got to the Eiffel Tower. To this day, I am always taken with it. It’s beautiful from every angle. Parisians will say that it’s big and hideous and it attracts way too many tourists, but at moments they are taken with it as well. Especially in the evenings when it sparkles which is for five minutes every hour from nightfall until 1 or 2 a.m. 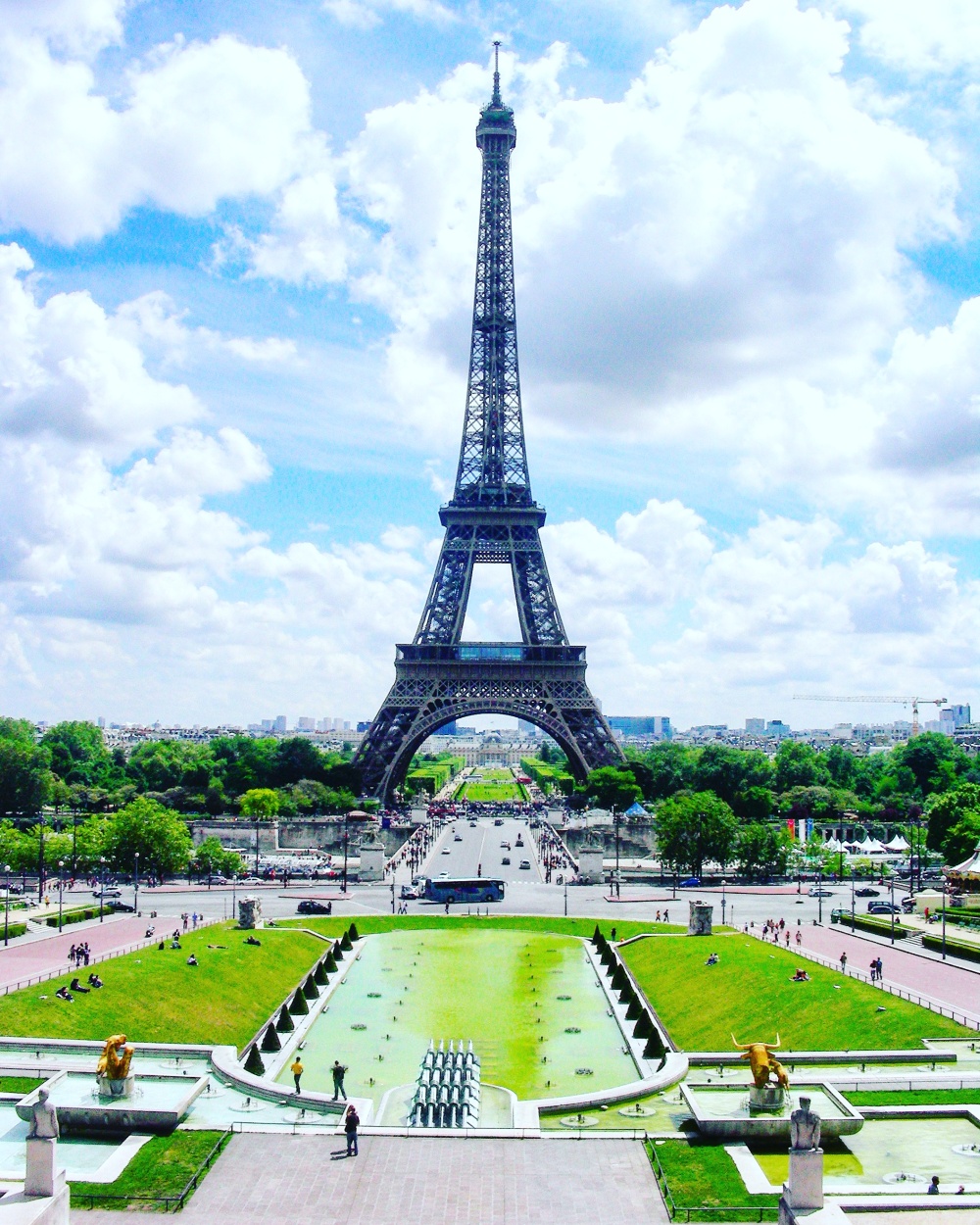 On the ride back all of a sudden it got me thinking about this little watersource in the old part of the town where I was born. The legend says that once a person visiting the city drinks water from the source, he or she will return over and over in the future. Now, I don’t know about that, but I figured that there are some places in the world which you can not visit just once. There is always something more to see, stuff to experience or they simply get under you skin. So, until the next time…Au revoir!

Repetto – get the chic Parisian girl look with the signature Repetto flats. Buttery leather and the fact that they can be found in almost any color makes them irresistible.
You can order them online since they deliver all around the world http://www.repetto.fr

La Mosquee de Paris – located at Place du Puits-de-l´Ermite, the largest mosque in France happens to have a fairytale like courtyard. You can sip tea and taste traditional Middle Eastern pastries there. The hammam spa is opened on different days and time for men and women, so pay attention to the opening hours online, if you plan to visit.

MON Hotel Paris Les Puces – 4 Rue Gambetta, Seasonal menu, great atmosphere and affordable prices. You will have to book in advance, as it is has very limited capacity. 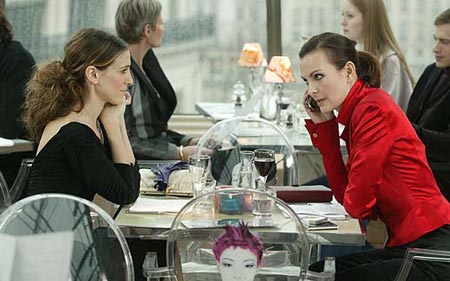